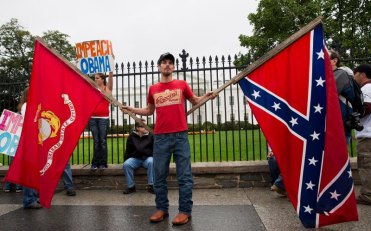 Recently this month two white female high school students, in what appeared to have been a pre-orchestrated event, stood proudly waving Confederate Battle Flags on one of America’s most hallowed grounds the Gettysburg Civil War Memorial Battlefield. The girls not only shared the photos via social media but also captioned the photos with “South will rise,” and “Already bought my first slave.” 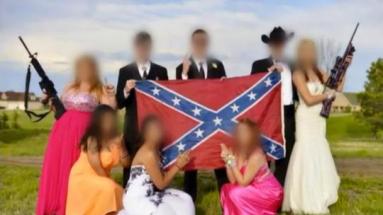 While one parent attributed the North Carolina’s East Chapel High school girls actions to naiveté their actions are representative of an alarming trend of young white kids from Long Island to California that are not only espousing racial hatred toward non-whites, as in the case where in 2012 Texas’ High School students taunted Mexican American basketball players with chants of “U.S.A.,” but underscore a troubling resurgence of Confederate Nationalism.

Take the incident in April 2014 when a couple of white male students who appeared at Long Island’s St. Anthony’s Catholic high school handball game were suspended for wearing the Confederate battle flag. In another recent case the photo of a group of Denver Colorado high school students dressed for prom, holding guns and the Confederate flag caused a social media uproar. In another example 28 year-old Bus driver Ken Webber of Oregon was suspended for flying the battle flag on his school bus. Rather than removing the flag a defiant Webber defiantly took the suspension saying, “No one here is gonna tell me what I can and can’t believe in.”  Weaver filed a lawsuit and won. Long Island, Colorado and Oregon could hardly be called southern strongholds. Yet, an increasing trend of whites in these areas seem to have gravitated toward what some argue are symbols of white supremacy and slavery.

These episodes whether isolated or falling into a coherent line of Confederate ideology are troubling. Foremost many white students and their parents have elected to reject years of purposeful multicultural education where students were taught the history of the long train of racial abuses suffered by African Americans both free and enslaved. Further they downplay the sacrifices of whites that fought to end slavery and the social, economic, and the political cost of waging the most horrific war ever fought on earth just to hold others in bondage.

The mythology of Confederate Nationalism has long since been debated by those that argued that it developed as an outgrowth of the Civil War and those that denied its existence altogether. Whether real or imagined Confederate Nationalism was always, at least within the African American community, a real and salient feature of white southern culture. Since the end of the Civil War African Americans, particularly those in the southern United States have always had to deal with a type of shadow Confederate Army. Southern white men and women have proudly flown the Battle Flags at state capital buildings, waved them at sporting events and displayed them to taunt Civil Rights marchers. Just recently the battle flag was moth balled as the representative symbol by one American university.

What has emerged, as a new twist to this surge in Confederate pride, is the linking of the Stars and Bars as the flag is often called with being American. Take for example the Colorado students that instagramed the photo of themselves holding guns and the Confederate flag. The kid’s stated, “We didn’t know it was wrong and we were tyring to express our love of being American.” How these kids were able to conjoin their Americaness to the most important symbol of Confederate and Anti-American identity is a twist of logic that only 19th century racial pseudo scientists could only envy. One only knows if Jefferson Davis, President of the Confederate States of America, is turning in his grave?

One question we should ask is why is this happening? During the 1970’s as a means to skirt school desegregation laws wealthy white parents opted out of public schools and created exclusive private schools. The less affluent white students that were left behind had no choice but to attend schools with minority students. However, beginning in the somewhere in the 2000’s less affluent white parents began a process of creating schools in all white communities after many cities were released from Federally mandated desegregation plans. Propublica reports that the south is seeing a resurgence of school re-segregation to the degree that 1 in 3 black student’s attends a school that looks as if “Brown V. Board of Education never happened.”

But it’s not only the reforming of segregated schools. School curriculums and textbooks have become battlegrounds for pro or neutral revision of antebellum history.   In 2013, Tracy Thompson author of the Mind of the South (2013) wrote of the ongoing revisionist history effort whereby southern schools and churches are still pretending the Civil War wasn’t about slavery. Thompson quoting James Loewen, a sociologist and author of “Lies My Teacher Told Me,” has said that when he speaks to public school educators across the country today, somewhere between 60 and 75 percent say that the Civil War was fought over the issue of states’ rights, rather than slavery.

The re-assurgence of Confederate nationalism seems to me not only a rejection of multi-culturalism but also an affirmation of a kind of distorted form of white identity. When did Confederate Nationalism equate with American identity and why does it appeal to young men and women in Oregon?   Why are so many young people willing to voice their disdain for multi-culturalism by adopting the symbols of hate?

What I fear is that as America continues to brown it may reach a threshold where Confederate Nationalism is not something that remains solely an act of flag waving but the acts and aspirations of a “disgruntled minority” that feels grieved that its white historical legacy is in jeopardy. The America south and the so-called Bible Belt is increasingly arming its citizenry by passing open gun carry laws, the question is for what purpose?