The Emanuel African Methodist Episcopal Church (EAME), the site of the terrorist attack on June 17, 2015, was again thrust into the forefront of the nation’s sorry culture of racism. The EAME’s history is entangled not only in its mission to provide for the spiritual needs of Charleston’s African American citizenry but its history is centered deeply and intertwined within the nations long and troubled history of slavery, abolition and struggle for black liberation. The EAME’s story is worth revisiting in conjunction with one of the nation’s darkest and most tragic incidents the rebellion and hanging of Denmark Vesey.

In 1781, Bermudian slave merchant Captain Joseph Vesey purchased a 14-year old African slave named Telemaque. After a time for reasons unknown, Vesey sold Telemaque to a planter in French Saint-Domingue what is now present-day Haiti. Telemaque suffered epileptic seizures and was returned to Captain Vesey who subsequently refunded the purchase price to the French planter. (Historians believe that Vesey probably faked his epileptic seizures to escape the brutal conditions of slave life in Haiti) 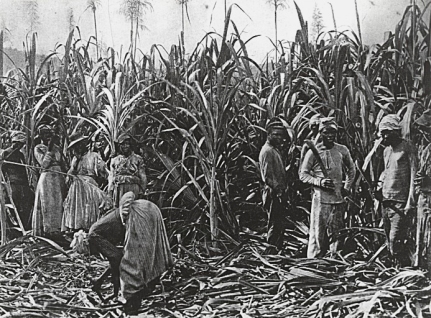 Telemaque had a gift for languages and learned to speak, read and write in French, Spanish and English. This would serve him later as he became an outspoken leader. Following the American Revolution, Captain Vesey retired from the sea and slave trade, settling in Charleston, South Carolina. Charleston was an international hub connected to the Caribbean’s booming merchant shipping trade, particularly focusing on illegal or contraband slaves (slave importation had been outlawed in 1808), rice and indigo exports. Vesey “hired out” Telemaque as a carpenter, and he quickly became a well-known artisan in the city and a member of the Charleston slave and free black community. 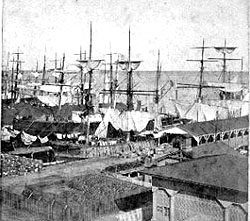 Port of Charleston circa 1865

On November 9, 1799, Telemaque, 32 years of age, won $1500 dollars in a Charleston city lottery. This would amount to roughly $31,000 dollars (calculating purchasing power) in 2015. Telemaque purchased his freedom from Captain Vesey and settled in the City as Denmark Vesey, a free man of color (Vesey chose the name Denmark from the country of Denmark). Vesey married a slave and had children. However due to American slave laws Vesey’s wife and children remained in bondage. Vesey made repeated attempts to purchase his family but was unable to do so. Meanwhile, Vesey found fellowship among the free black population. However, the black community had long been subjected to overtly harsh racism by its white citizenry.  In particular the white community had, by law, complete oversight of the where and how its black population worshipped. Generally blacks could not worship after daylight hours, were forbidden to read and had to be supervised by white clergy.

Denmark joined a local white run Presbyterian Church. The local Methodist Episcopal Church of Charleston relegated its black congregation to second-class membership, subjecting it to constant indignities and insults. The church segregated blacks in separate seating, denied them any say in Church governance and forbid blacks a ministerial role. The breaking point came in 1816 when white Church leaders voted to build a Hearse House on top of the black burial grounds. This insult spurred the entire black congregation to walk out and to form what became the Emanuel African Methodist Episcopal Church (EAME). Vesey was one of its organizers.

The EAME Church was supported by a few progressive white clergy in the city and rapidly attracted nearly two thousand members, making this the second-largest AME congregation in the nation. However, Charleston had a rabid pro-white-anti-black citizenry, led by, among others Preston Brooks a ferocious advocate of black slavery, preacher of black inferiority and advocate of states’ rights. Brooks is primarily remembered for beating Senator Charles Sumner an abolitionist, with a cane on the floor of the United States Senate, on May 22, 1856 after Sumner gave an impassioned anti-slavery speech.

The EAME Church became a breeding ground for black pride and uplift. White city officials became so alarmed by the EAME’s growing influence among its black slave and free population that it twice closed it for violating slave laws related to times and purpose of gatherings. In 1818 Charleston officials arrested 140 black church members and sentenced eight church leaders to heavy fines and whippings. City officials again raided the church in 1820 and 1821.

Although the details are sketchy, most likely in early 1822, Vesey a co-organizer of EAME became leader of a group of blacks and planned to start a slave uprising. The logistics were fairly simple as Charleston had a majority black population. Vesey and his followers were thought to have planned to kill slaveholders in Charleston, liberate the slaves, and sail to the black republic of Haiti, which had won its independence in 1804. It’s likely that Vesey wanted to rescue his family from slavery. Word of the plan was leaked, (most probably by a fellow black) and city officials and white citizens terrified that a black revolution, like that of Haiti, would visit its State quickly had a militia arrest the plot’s leaders and many suspected followers in June. Not one white person was killed or injured. Vesey and five slaves were among the first group of men judged guilty by the secret proceedings of a city-appointed Court and condemned to death; they were executed by hanging on July 2, 1822. Later one of his sons was judged guilty of this conspiracy and was among many blacks deported. Interesting enough the Haitian Revolution spurred South Carolinians to ensure that every white male citizen was armed and eligible for militia service.

In 1822 the city-appointed Court of Magistrates and Freeholders continued to arrest blacks and in July roughly 30 more were executed. The Court examined a total of 131 men, convicted 67 of conspiracy, hanged 35 (including Vesey), deported 31 men, reviewed and acquitted 27, and questioned and released 38. Because Vesey was one of the plot organizers and leader the original church was burned down. It is unlikely that 131 blacks were involved and many believed that whites used the Vesey plot as a means to terrorize the black community and in particular to punish the EAME Congregation. Whites believing that black churches fermented slave rebellions outlawed all-black churches in Charleston in 1834. The EAME Congregation met in secret until the end of the Civil War in 1865.

View of the last Palmetto tree in Charleston (1865)

On February 18, 1865 the mayor surrendered the city to Union General Alexander Schimmelfennig; and Union troops. After the eventual surrender of the Confederate States of America, Federal forces remained in Charleston during the city’s reconstruction. After the city’s liberation Bishop Daniel Payne (Head of the National AME Church) installed Reverend Richard H. Cain as the pastor of the congregations that would become Emanuel A.M.E. and Morris Brown A.M.E. In 1872, after serving in the South Carolina Senate (1868-1872), Reverend Cain became a Republican Congressman in the U.S. House of Representatives.

The congregation rebuilt the church between 1865 and 1872 under the lead of the architect Robert Vesey, one son of Denmark Vesey. After an earthquake demolished that building in 1886, President Grover Cleveland donated ten dollars ($300) to the church to aid its rebuilding efforts, noting that he was “very glad to contribute something for so worthy a cause.” However, being a Democrat, he also donated $20 ($600) dollars to the Confederate Home, a “haven for white widows.” The current EAME building was constructed in 1891. The location of the post-Civil War churches is on the north side of Calhoun Street (named after rabid racist and secessionist, former Vice President John C. Calhoun); blacks were not welcome on the south side of what was then known as Boundary Street when the church was built.

The continued saga of the EAME church underscores the continued and disturbing racial animosity, fear and hatred of black religious self expression and the need to consider a move toward a systematic and formalized commitment of black church security.  This would include security guidelines, procedures, and ongoing contact with law enforcement including the FBI and a recognition that no matter how much we are tied to this land there will always be individuals committed to insisting that this is and will remain a “white man’s country.”

One thought on “Terror Revisited: The Emanuel African Methodist Episcopal Church and the 1822 Plot For Freedom!”