Beasts of No Nation an American film directed by Cary Joji Fukunaga (Sin Nombre, 2009 & Jane Eyre, 2011) is based on the acclaimed book under the same title by Nigerian author, sociologist and physician Uzodinma Iwealaand. Beasts stars the acclaimed British-Afro actor Edris Elba as the Commandant and Ghanaian newcomer Abraham Attah as Agu–a boy given little choice but to become one of the estimated 120,000 child soldiers of Africa. 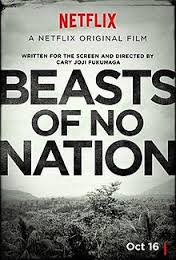 Beasts is a gut wrenching drama set in an unnamed African country being torn apart by the ravages of civil war. To set the stage of how devastating civil war has been to African families, the film begins with an exploration of the close relationship between Agu, his mother, sister, older brother, father and grandfather. Agu is growing up surrounded by the daily rhythms of life disrupted by war but safe, at the moment, by the protection of Nigerian Peace-Keepers.   Agu’s family, like many families in Sub-Saharan Africa are not rich materially but wealthy in shared community and familial bonds. But life is soon devastatingly interrupted as both Government and Rebel Armies advance on their village intent on rooting out sympathizers of both sides of the conflict. 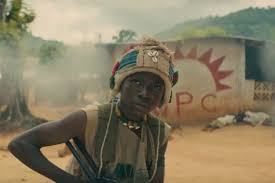 When war comes to Agu’s community, his mother and sister are able to escape but he along with his brother, father and grandfather are left to fend for themselves against the onslaught of two Armies making their way and gearing up for the final battle in the capital city. Government soldiers’ callously murder Agu’s brother, father and grandfather in a display of callous indifference. Agu manages to escape into the jungle but soon is captured by the Rebel Army. At this juncture Agu meets and is saved by the Commandant (Edris Elba). The remainder of the film is an exploration of the methods used, by the Rebel Army, to control the minds of the African children and adolescent boys for the purposes of exploiting their bodies as pawns in struggle of personal ambitions. At one key moment in the film, the Commandant reminds his 2IC (Second in Command) that no young child is worthless because they have eyes to see the enemy and fingers to pull the triggers. African mysticism, patriotism, mythology of war, ritual, the psychological warfare are used to bind the young soldiers in a cause for revenge and to be exploited in the Commandants quest for his share of the wealth. But more importantly the Commandant gives Agu the ability to revenge the death of his father and brother.

One of the most fascinating but under explored aspects of the film by Fukunaga is whether the child soldiers have come to accept war as a fait du compli, or whether there is hope to reclaim these young boys from the ravages of war and mental abuse. The ending (no spoilers here) suggests no particular answer to this question, except to say the film suggests that more than a few of the boys struggle with conceiving a life without war.

The casting of the film is superb. Elba has the cultural and historical genes necessary to pull off his role and his acting is credible. Elba was born in Newham, Essex, England. His father was a Sierra Leonean who worked in a Ford motor factory, and his mother, Eve, was a Ghanaian who had a clerical job. . The Sierra Leone Civil War (1991–2002) began when the Revolutionary United Front (RUF), with support of Charles Taylor’s National Patriotic Front of Liberia (NPFL), intervened in Sierra Leone in an attempt to overthrow the Joseph Momoh government. The civil war lasted 11 years, and left over 50,000 dead. Elba as the Commandant portrays a complex character that is cruel, ambitious, merciful and above all else a realist. Abraham Attah (Agu) won the Marcello Mastroianni Award for best actor at the 72nd Venice International Film Festival. 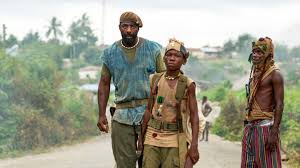 The film opened in select theaters on Oct. 2015 amid controversy. The production company made a decision to release the film simultaneously on just a few theaters and primarily on Netflix, who paid roughly $12 million dollars for exclusive rights to the film’s early release. This is a direct threat to as many major theatre chains and their boycott, while at the end of the day is futile, is understandable. Netflix and other movie streaming services pose the greatest challenge to traditional over-salted–faux butter popcorn–and sticky floor theaters.

In any case Beasts of No Nation is a shot across the bow and should garner some consideration for a nomination for best actor (Abraham Attah) and possibly best picture. It’s streaming now on Netflix.